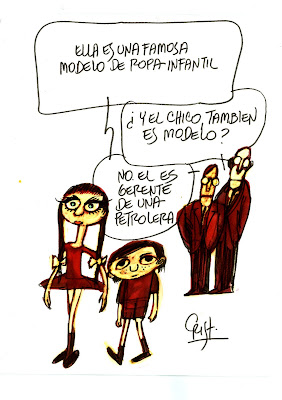 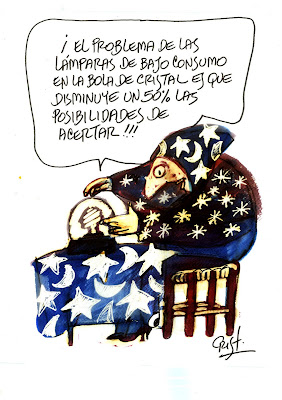 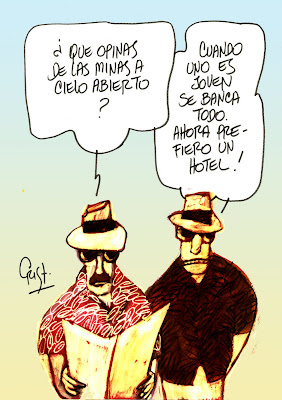 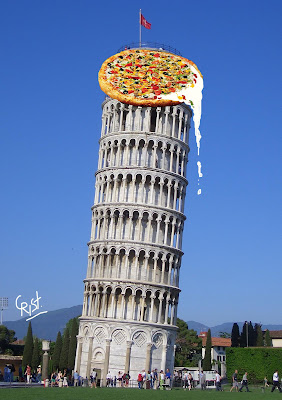 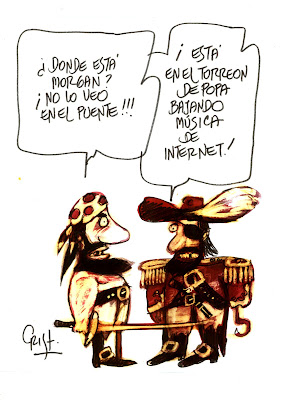 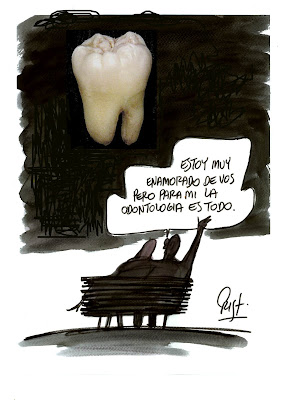 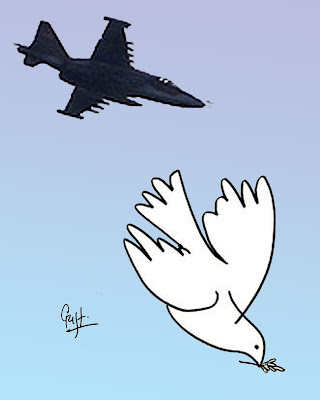 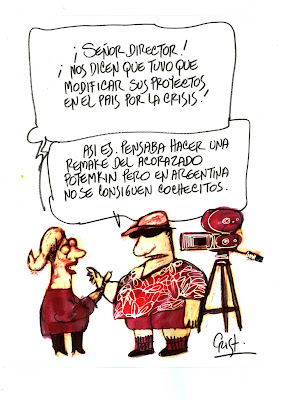 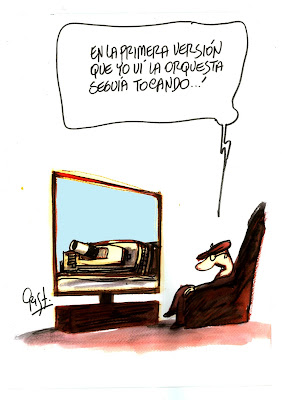 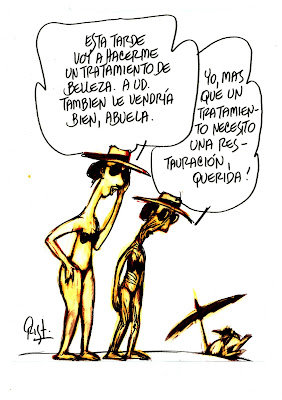 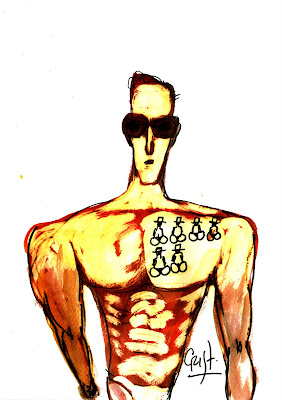 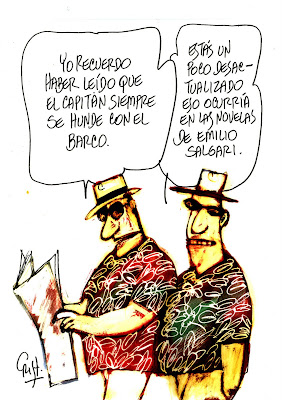 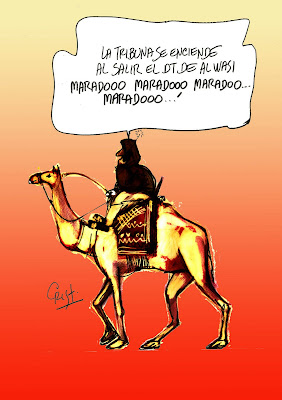 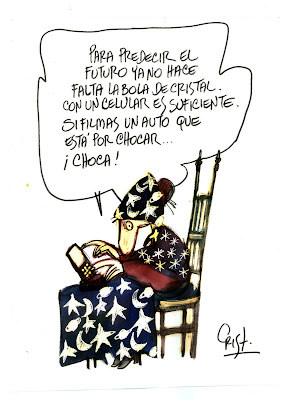 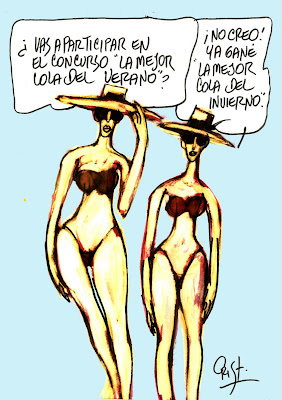 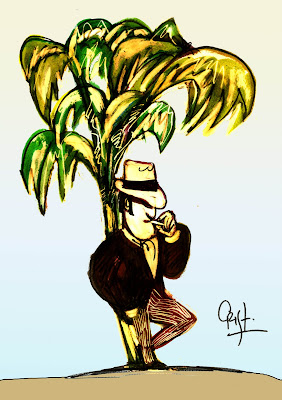 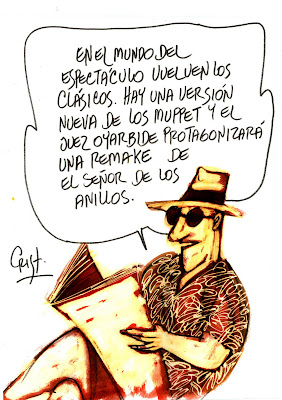 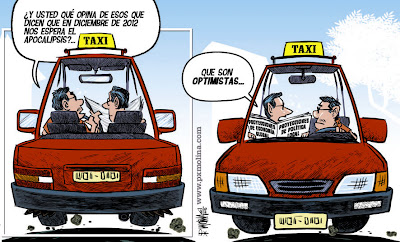 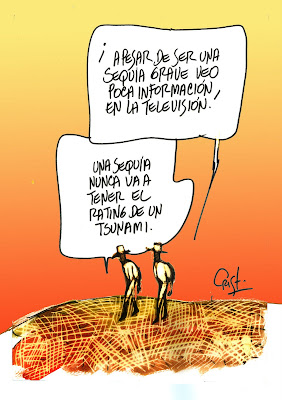 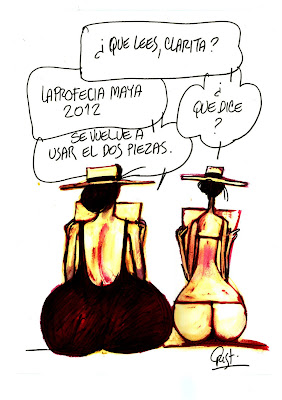 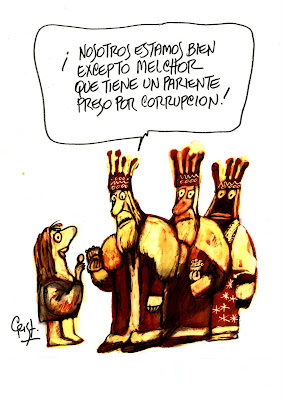 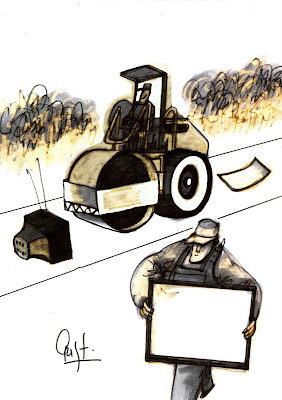 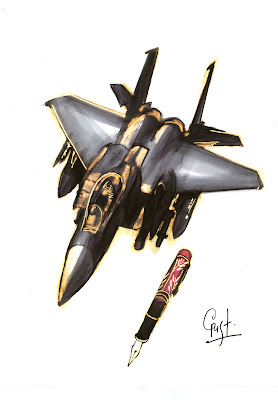 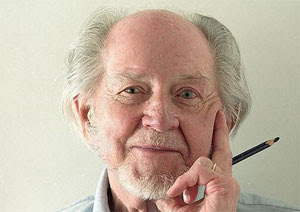 The inevitable day has come-I'm deeply saddened to report the death of Ronald Searle.
He passed away peacefully in his sleep on Friday 30th December, 2011.
Since the death last summer of his wife Monica,
his health declined and now Mr and Mrs Mole are together again.

Ronald Searle was born March 3, 1920 in Cambridge, England into a working class family.
He wanted to be an artist and drew credibly by the age of five and professionally at 15.
At that age he was making money for Art School classes by working
at a parcel packing firm, when the cartoonist for the Cambridge Daily News quit the paper.
In a move that was to affect a great deal of his life, Searle decided to apply for the job.
He got it and began a series of 195 weekly cartoons, each of which paid more
than a week's salary at the packing house.
Continued art classes were assured, but several detours lay ahead.

In 1939 he received his Minister of Education Drawing Diploma and enlisted in
the Territorial Army as an Architectural Draughtsman.
He continued to submit drawings and cartoons to newspapers and
magazines for the next two years, including the prototype St Trinian's
panel which appeared in Lilliput in October 1941.
That month, he shipped out to Singapore and hell.

One month after he arrived, Singapore was surrendered to the Japanese
and Searle spent the rest of the war as a prisoner.
The prison camp at Changi and the forced labor details building
the railway from Ban Pong to Burma were horrendous realities.
Searle was victim and observer and recorder of atrocities and
diseases and deaths. He never stopped drawing, despite beatings,
bouts of malaria and beri beri, and a Japanese guard's pick axe in the back.
His art sustained him and, without doubt, many of his companions in misery.

Russell Davies, in his 1990 book, Ronald Searle, A Biography,
has much detail about this portion of his life.
Two vivid passages struck me especially hard:

The Siam-Burma railway was completed on 25 October.
A celebrated feature film, The Bridge on the River Kwai,
later gave it to be understood that British personnel might
have drawn some mad sense of achievement from their forced
collaboration on this project. ...there was no question of wasting
moral energy on the formation of an attitude to the railway.
A man's own survival became his full-time task.
Whatever fragments of concern were left over, he might donate to his
fellows and the goal of getting as many out of the jungle alive as could make it."
and a quote from Russell Bradon regarding Searle,
"If you can imagine something that weighs six stone (84 pounds)
or so, is on the point of death and has no qualities of the human
condition that aren't revolting, calmly lying there with a pencil
and a scrap of paper, drawing, you have some idea of the difference
of temperament that this man had from the ordinary human being."


His return to Cambridge in October of 1945 was followed by an exhibition
of his war drawings and, in 1946, by marriage to the editor of Lilliput
and the publication of Forty Drawings, a book of his art. England
wasn't ready for the power of Searle's images and the book
was a commercial failure. Another 1946 book, Le Nouveau Ballet Anglais,
was published in France, also to no great financial success.
His second life detour pointed to cartooning, and he embraced it.

He made several forays into book illustration, but the cartoons were paying the bills.
1948 saw publication of Hurrah for St Trinian's, his first collection of cartoons
and the first nail in the constricting coffin of public preconception.
Hurrah and The Female Approach, in 1949, both featured cartoons
on other subjects, but it is for the images of the unholy girls'
school that they are most remembered. For five years he was to be
saddled with the chore of creating mischief for the girls to get up to until,
in his own 1953 Souls in Torment, he blew up the school with an atomic bomb.
If only that had been sufficient! At right, they appear
alarmingly healthy in The Terror of St Trinian's from 1956.
They went on to inspire a string of films that probably grew increasingly embarrassing.

By 1950 he was entrenched as the illustrator for Punch's theater column,
had been featured in an issue of The Studio, and been sent to Paris with his wife,
Kaye Webb, for a working holiday that resulted in A Paris Sketchbook.
For decades, Searle's life would revolve around various trips
for various magazines that reveled in and were enriched by
his illustrations made on the spot. As Russell Davies points out,
"He was not making the world look funny, but experiencing it as funny;
it was less a style than a psychological condition."

In a most remarkably short time, Searle had become one of the foremost
illustrators in England. His own publishing company, Perpetua Books ,
was started to collect his cartoons into book form. Merry England, etc.
and The Rake's Progress were among the first published.
In 1956, scarcely ten years after starting his post-war career,
he became a member of Mr. Punch's Table and one of their highest-paid staffers.
He stayed for five years and, though officially working exclusively for Punch,
his contract allowed for work outside the country and offers
began pouring in from America. Among the first was an animated film,
Energetically Yours, for Standard Oil. Its edgy, energetic style
was to influence a generation of films, starting with One Hundred and One Dalmations.
His first visit to the U.S.also led to a Punch feature, written by Alex Atkinson,
By Rocking Chair Across America, the first of many such collaborations.
It was an immediate success.


Davies again, "Where exaggeration was required, it took an organic form;
Searle would take a style or taste and show it in the grip of some
fantastic growth-hormone. Anybody could have had the idea of making
a Texan automobile a riot of carbuncular rococo excrescences,
but only Searle ... could have make the thing look as if it had arrived
at that state by some sort of ghastly evolutionary process."

Holiday magazine became a regular outlet, often pre-empting time
he might have spent for Punch. He became the first non-American
illustrator to receive the National Cartoonists Society's Reuben Award in 1960.
Life magazine sent him on assignment to Jerusalem for Adolf Eichmann's trial.
His popularity grew and his life became less and less his own. Finally in 1961,
he abandoned the detour and simply packed his bags,
left a note for his wife and twins and departed for Paris to begin again down the road to Art.

This journey began with a series of paintings that have yet to see print.
Previewed in an American gallery as "Anatomies and Decapitations,"
these violent and disturbing paintings (73 eventually) seem to have
been an exploration and a release combined. Searle wasn't sure
where he was going, but the direction seems to have been away from the biting,
but approachable, satire for which he was famous.
The future, when it came, was going to have a sharper edge.
Initially, though, that future looked much like the past,
except there were fewer British assignments and a different traveling
companion. His flight to Paris was as much towards the woman, Monica Searle,
who remains his wife, as it was away from intrusions and obligations
over which he had no control. And the line of drawings
was changing - the pen nib was spreading and splotching in new,
angular ways and the satire had a harder and more bitter bite.

Lighter assignments did continue during the Sixties.
He did the design for the animated opening sequences for the films,
Those Magnificent Men in Their Flying Machines and Monte Carlo or Bust,
covers for TV Guide, travel illustrations for Holiday, art for The New Yorker,
a divorce from Kaye in 1966 and marriage to Monica in 1967.
Several exhibitions of his work were staged and the public was exposed
to the illustrations that made other artists say, "Beware of Ronald Searle,
the man is dangerous." Why anyone would willingly put themselves
in the jeopardy of his pen is a mystery, but The Hudson Bay Company
commissioned him to document the annals of their 300-year old company.
The Great Fur Opera (1970) was the result and images like "Life at the Bay"
were pointed reminders of just how dangerous a man Ronald Searle was.


The late 60s also brought forth Hello - Where Did All the People Go? (1968),
Take One Toad (1968), The Square Egg (1968), Homage a Toulouse-Lautrec(1969),
The Adventures of Baron Munchausen (1969), and Secret Sketchbook (1970).
His output was prodigious and becoming more "dangerous" with each drawing.
His ability to observe and render the emotions (and images that could trigger them)
was at an all-time high. His road to Art was widening and all
facets of his artistic temperament were being nurtured. It was time,
unfortunately, for another detour.

Monica was diagnosed with terminal breast cancer and it was only through
the intervention (and invention) of chemotherapy that she survived.
Leon Schwarzenberg took personal charge of her treatment and literally
experimented her cure. Searle survived the ordeal, too,
much as he had survived Changi - he drew. His life revolved around Monica
and her treatments, but the need to create to fill up the anxious days was always there.
In 1973 he became the first non-French living artist to exhibit at
the Bibliotheque Nationale - a great honor marred only by
he theft of three of his paintings. In September of 1975,
the Searles decamped from Paris to a new,
still more private life, in Haute-Provence.

There, in a small French village, they had built a house during
Monica's illness - thumbing there noses at the disease.
She still was recovering when they arrived but has since been
pronounced cured. Searle celebrated by taking on more work.
Since the move he has designed commemorative medals for the French Mint,
allowed his Paris drawings to appear in a "collaboration" with Irwin Shaw, Paris! Paris!
, produced lithographs of his drawings (ah, Art!), created ads for American
Express (ah, Commerce!), published his cat books (ah, Sustenance),
and created two of my very favorites,
Slightly Foxed - But Still Desirable.

Searle continues to amuse and amaze to this day.
His bite and his bark are equally ferocious, but always delivered with a wink
(or is that a sly grimace?). His rise was meteoric and merited and the
longevity of his reign is solely due to his talent. It's also our good fortune.